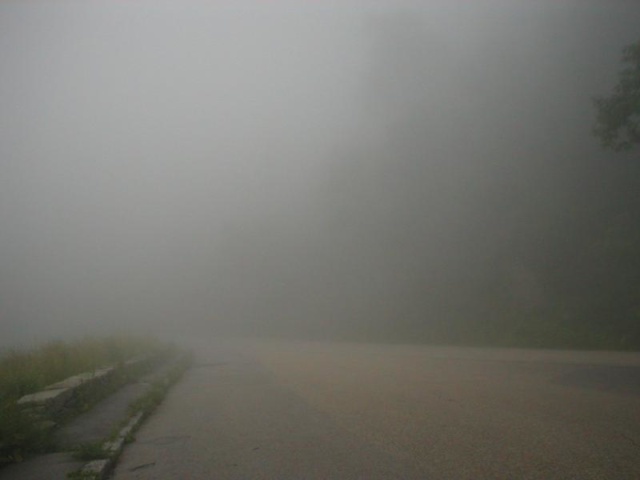 In the summer of 2003 I spent several hours riding along the Blue Ridge Parkway in one of the densest fogs I have ever ridden in. While I have ridden many deserted roads at all hours of day or night in my years of riding, I can’t remember ever having felt so totally alone as I did during those hours atop the Blue Ridge Mountains. At one point it seemed as if I was no longer traveling along the road surface, but rather that the section of road within my vision and I were moving as one through the void. When I finally emerged back into the daylight as the road descended from the cloud layer and the world was once more spread out below me, it was almost a revelation or reaffirmation of its existence, I could almost imagine that perhaps the world I now viewed had simply been a figment of my imagination during those hours lost in the fog. It was one of those experiences where you might question which is the more real, the monochrome world of the fog or the multi-colored world we normally accept as the more real one. Or  perhaps, both are equally real.

Regardless of what you may choose to believe, it is that impression of solitude and isolation from the rest of the world during those hours that I have tried to capture in this poem.